Ham and Cheese Savory Muffins Recipe is a great grab and go breakfast. This savory breakfast muffin is loaded with ham and cheese.

Fluffy Savory Breakfast Muffins with Ham and Cheese. These little muffins are delicious and are perfect for a quick breakfast on the go! These savory muffins would also be great to bring to the office for a breakfast snack.

How to Make Savory Muffins with Ham and Cheese

The first step is to preheat your oven. You will finish the prep by the time the oven heats up.

In a skillet or saute pan melt your butter over medium-high heat. Next, add in the finely diced onions and cook for 3 to 5 minutes until tender.

In a separate mixing bowl whisk together the milk, Dijon mustard and egg. Pour this mixture into the baking mix and cheddar cheese mixture. Stir until just moistened. Next, add in the ham and onions. Stir until well blended using minimum stir strokes as possible. Over stirring will make the muffins like hockey pucks.

Spoon this mixture evenly into a 12 cup cupcake/muffin pan. Next, sprinkle remaining cheese and poppy seeds on top of the muffins.

Place in the preheated oven and bake for 17 minutes or until golden.

Allow the ham and cheese muffins to cool in the pan for a few minutes before removing.

After making this recipe I thought to pan fry the ham along with the onions. I haven’t tried this out but I am willing it would be extra delicious.

I store my leftover savory muffins in a large ziplock bag. My family members will grab one or two from the bag and pop them in the microwave for a quick breakfast.

Store leftovers in a ziplock bag or airtight container in the refrigerator. The muffins are good for up to 4 days.

To reheat: wrap muffin a paper towel and microwave for 30 seconds.

More Recipe Ideas for Breakfast On the Go! 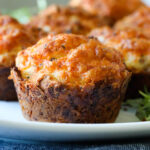 Savory Muffins with Ham and Cheese

A savory muffin loaded with ham and cheese for breakfast on the go.