Banana Nutella Swirl Skillet Cake with Nutella Sauce can be served for a special breakfast or dessert. A Nutella swirl is baked into the skillet cake then topped with bananas and drizzled with Nutella sauce. My friends, this Banana Nutella Swirl Skillet Cake with hot Nutella Sauce is amazing! I wish I could have you all over for breakfast or dessert. This is one huge pancake with mashed bananas and a Nutella swirl served with fresh sliced bananas and a hot off the burner Nutella sauce poured over the top.

I love bananas and I have written five other recipes with bananas being the main ingredient. When I have bananas that are getting to there ripened state it gives me an excuse to get creative in the kitchen.

This morning I had two ripe bananas calling my name. I opened up the pantry and browsed the shelves. I originally thought donut holes but, when I saw the Bisquick the song Banana Pancakes by Jack Johnson came tomind. I couldn’t just make banana pancakes. Not with a jar of Nutella staring right at me. This is a pretty awesome breakfast. If you have leftovers save it for dessert. I would even go as far as putting a heaping scoop of vanilla ice cream, sliced bananas, and hot Nutella sauce on top.

So let’s just quickly talk about this skillet cake. I know you are probably thinking of those light fluffy pancakes typical of Bisquick but, these are a little different. I had to change it up a bit otherwise it would be a skillet full of mush. It still kinda tastes like a pancake only with bananas and Nutella laced through it. 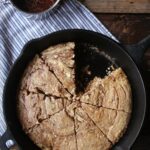 Recipe was originally written under my former blog, Year-RoundGiving