You may find crostini already bagged up in the deli section of your grocery store.

How to Make Burrata Caprese Appetizer

First, make the crostini. Preheat your oven to 350°F. Slice your baguette into 1/4-inch slices. Spread baguette slices on two large baking sheets making sure they do not overlap. Brush both sides with oil, and season with salt and pepper.

Next, bake for 20 minutes or until golden. Rotate baking sheets halfway through bake time. Set crostini aside and allow to cool before topping them with the Caprese salad.

For the Caprese Salad

On top of the Crostini spread a layer of Burrata cheese. Next, top with tomatoes, basil, freshly cracked salt, and pepper. 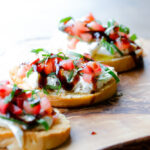 For the Burrata Caprese

For the Caprese Salad

Buy store-bought crostini to save time!

More Recipe Tips and Variations are in the post above.