This Brownie Pumpkin Cheesecake Trifle dessert is where chocolate meets pumpkin in a layered decadent Fall dessert. Layers of moist fudgy brownies, fresh whipped cream, and pumpkin cheesecake with a ginger snap crumbs to top it all off. Pumpkin Spice season otherwise known as Fall is that flavorful time of year where everyone who is anyone is pumpkin spicing it up. We have a few up our sleeves and this one is extra awesome because it has brownies. Chocolate and pumpkin go together like peanut butter and jelly. Our Chocolate Pumpkin Smoothie will prove that point in the first sip.

Chose your favorite brownie mix. I use the Ghiradelli brand but pick whatever. Make the brownies first. That way they have time to cool. If they are hot your pumpkin cheesecake is going to get all melted. You bake the brownies as directed and cut out chunks to fit your dessert glass.

This fluffy layer is the star of the dessert. Make sure to layer it in thick. You can spoon the pumpkin cheesecake layer or fill a piping bag with a tip to make a pretty texture. Either way is going to taste the same. If you have some leftover, cool! Grab some dippers like graham crackers, pretzels, or gingers snaps and it is a dessert dip.

You are going to want to make your own whipped cream. Before you start thinking about the can of Reddi Wip hear me out. Half of the whipped cream is getting folded into the pumpkin cheesecake. This is essential to the recipe. Whipped Cream is really easy to make. It is just heavy cream and powdered sugar. Use your Kitchen Aid or electric beaters and whip it until it forms stiff peaks. 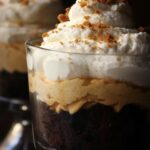