Crock Pot Oatmeal with Apples and Cinnamon with milk and maple syrup drizzled over the top is a warm and comforting breakfast.

Crock Pot Oatmeal with Apples and Cinnamon is the perfect weekend breakfast on a Fall or Winter day. The recipe makes plenty for the whole family. Chunks of apples and cinnamon give this oatmeal that seasonal flavor we love.

I love a good slow-cooked meal. Especially one you can wake up to on a cold morning. With this Slow Cooker Oatmeal Apples and Cinnamon recipe, it slow cooks for 7 hours. I put it on and wake up to the house smelling sweet and like Fall. The sweet aroma coming from the slow cooker is mesmerizing. Everyone will get up for that sweet smell.

Get all my Slow Cooker Recipes here!

This Crock Pot Oatmeal with Apples and Cinnamon breakfast is so easy to make! You just put everything in the slow cooker, set it, and forget it.

Once it comes out of the crockpot I pour a splash or two of milk and then drizzle about a tablespoon of warm maple syrup over the top. The maple syrup takes this oatmeal to a whole new level of deliciousness.

This crockpot apple cinnamon oatmeal and a cup of coffee is pure bliss. Plus everyone at the table is quiet because they are in their own apple cinnamon breakfast heaven. After this filling breakfast, you will want to stay in your PJs all day!

Along with maple syrup, another delicious addition would be chopped pecans. I only wish I had some on hand when I made this. Just sprinkle on some chopped pecans in your bowl when serving. Don’t cook them in the slow cooker.’

You will need a Crock-Pot to make this recipe.

Here is a link to the one used to make this recipe. Hamilton Beach 6 quart Slow Cooker.

The apples come out so tender. This breakfast is so delicious it is almost like dessert!

If you have leftovers, place them in an airtight container and refrigerate them. To reheat, place in a microwavable safe bowl and add a splash of milk. Microwave in 30-second intervals until heated through.

You may also be interested in my Baked Quinoa Oatmeal with Apples & Cinnamon Recipe. 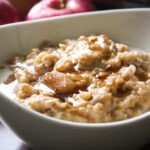