Homemade Cinnamon Pecan Raisin Granola Recipe from scratch. Make a big batch to serve for breakfast or as a sweet crunchy topping for ice cream. There is nothing better than homemade granola. The store-bought stuff can’t compete. This raisin granola baked fresh and warm right out of your oven will have you munching on this stuff all day.

We love this granola by itself, eaten like a bowl of cereal with milk, sprinkled on yogurt and even on ice cream. Homemade granola is addictive. We typically finish off a batch in two days.

The texture of fresh-baked Homemade Granola is just amazing. It is light and crunchy.

Don’t get distracted and use a timer. This granola can burn quickly. Be sure to stay in the kitchen and keep an eye on it.

Once it has cooled. I recommend storing it in an airtight container.  This will keep the raisin granola fresh and maintain its light crunchy texture.

Swap out raisins for craisins in the Fall. 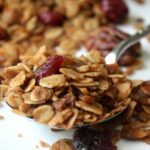