This Crock Pot Cinnamon Roll Casserole is quick to throw together and comes out perfect. Every bite melts in your mouth. Perfect weekend breakfast for the family. Or bring it to work and keep it warm in your crockpot.

Just like Crock Pot Cinnamon Rolls but gooey and melt in your mouth good!

Have you tried Oatmeal in your Crock-Pot? So easy and so good!

This Crockpot Cinnamon Roll Casserole is ready in 3 hours which makes this a perfect Brunch recipe. Make it in the morning and it is ready for Brunch.

After the Cinnamon Roll Casserole has finished cooking in your slow cooker you may want to add some extra topping when serving.

Scoop out a portion onto a plate. Top with the following for extra flavor and texture:

Why Cinnamon Rolls in a Crock Pot?

This recipe is more like a casserole and every bite is soft and delicious.  Some cinnamon rolls can be tough on the outside after baking.  When Cinnamon Rolls are made in the CrockPot every bite taste like the center of a cinnamon roll. It is everyone’s favorite part!

Transfer leftovers into an airtight container and refrigerate.

To reheat a single portion place on a microwavable plate and microwave for 30 seconds. You may want to drizzle some maple syrup over the top of the casserole! 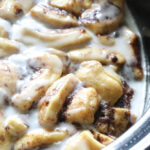 Every bite tastes like the soft center of a Cinnamon Roll.